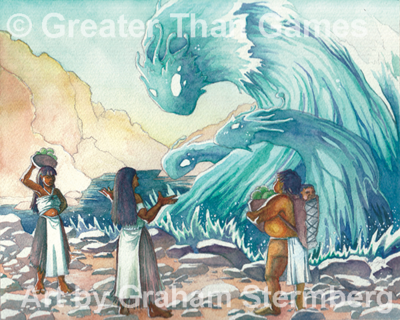 The Dahan learn that these Invaders are merely one of many groups, any of who might want to colonize the Island. You decide to set up wardings along the shoreline - once they're complete, you'll be able to deal with the current crop of Invaders and keep any others from finding you.

RULE CHANGES
Once per turn, each Spirit may play a Power Card face-down as if it were:

to add a Warding Pattern.

(This uses a card play as normal.)

Once placed, each Warding Pattern grants Defend 3 in its land. They are destroyed any time

is added to their land.

in addition to the usual 1

.
SETUP CHANGES
Get out 4 Scenario Markers per player; these represent Warding Patterns. (If you run out of tokens, you can re-use destroyed/already-placed ones.) After making the Fear Deck, put all remaining Fear Cards on the bottom. If they run out, reshuffle the deck.
VICTORY
The normal Fear Victory is not Available. Instead:

Terror 2+
There is a Warding Pattern in every Coastal land.