on your starting board in a mountain of your choice. Push all

Benefits more than most Spirits from getting

onto the board; in addition to the usual benefits, it can fuel an Explosive Eruption. This can result in a huge turn, but if overdone the following turn or two may be very constrained.

Bigger eruptions are extremely powerful, but cause

, and the Invaders may not provide the luxury of enough time to build up the desired pressure - judging the timing of when to erupt and for how much is a key part of playing this Spirit. 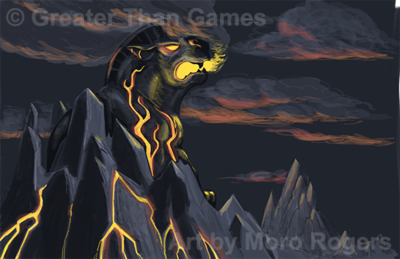 may only be added/moved into Mountain.

COLLAPSE IN A BLAST OF LAVA AND STEAM

is destroyed, in that land, deal 1 Damage per destroyed

to both Invaders and to

VOLCANIC PEAKS TOWER OVER THE LANDSCAPE

if you have 3 or more

in the origin land.

in target land; Template:Presencedestroyed checks how many you destroyed. This Power does Damage (separately and equally) to both Invaders and

. Ranges below can't be increased.

2 Template:Presencedestroyed In one land within 1

6 Template:Presencedestroyed In each land within 1

to target land, this does not destroy your

10 Template:Presencedestroyed In each land within 2

if it doesn't have any.

POWERED BY THE FURNACE OF THE EARTH

Add 1 of your destroyed

Draw 3 Power Cards from one deck. Keep as many as you want for 2 Energy each. (You still Forget when keeping Major Powers.)

Move up to 2 of your

from other lands to target land.

Return up to 2 of your destroyed

A spirit of fire and earth stretching upwards to the sky, casting a long and dangerous shadow across the land. The deeper Spirits of vulcanism are too powerful and slow, too removed to respond to the Invaders - but not so this one.

It doesn't dislike humans per se, but neither does it have much use for them, so the Dahan tend to keep away from it as much as possible and will not quarry stone in its shadow. Of course, larger eruptions can impact a good chunk of the island, so they sometimes end up dealing with its temper whether they want to or not.

There is more than one Volcano Spirit, and many others partake of volcanism in some manner or other, but Volcano Looming High may be the most prominent of them all: while its core essence is born from the deep fires of the earth, it exists where that molten stone reaches high into the sky, peaks looming overhead and explosions blotting out the sun. It is extremely visible, and the Dahan take care not to live too close: it’s not hostile, but nor is it a friend. Sooner or later its power will rise, the stone of the mountain will swell upwards, and an explosion - perhaps large, perhaps small - will follow.

It’s a mostly felsic volcano, so it doesn’t burble highly-liquid lava the way Hawaiian volcanoes do - its lava is thick and viscous, sometimes visually indistinguishable from stone save for a red glow visible only at night. As a result, pressure builds up in the earth over time, and the mountain grows larger as a lava dome rises upwards. This may subside naturally or be alleviated by smaller blasts of pyroclastic activity here and there, but can also culminate in an explosive collapse of the built-up lava dome, like the eruptions of the Soufriere Hills or Mt. St. Helens.

Volcano Looming High is tall, and proud, and rejoices in its strength. It’s aloof from most Spirits more due to location than any desire for isolation, though it’s also entirely unbothered by its relative paucity of visitors - it has a magnificent view, after all, can see what transpires virtually everywhere, and is grounded by a pillar of molten stone coming straight out of the earth’s heart. Maybe it has a hard time perceiving down to the scale of individual humans, but it doesn’t see that as particularly important.

if Invaders are present.
Push 2

to land(s) without your

.
1
Boon of the Mountain's Fire

with their Powers that originate from a Mountain.
1
Lava Flows

I’ve wanted to do a volcano spirit since the very early days of Spirit Island, but held off for a long time due to underlying mechanics: I felt lava flows should be represented by Barrier tokens, cutting off the Invaders. As it turns out, there are no Barrier tokens (that’s a story for another day), but the decision to hold off still worked out well, as Badlands tokens are also thematically useful for it. (Wilds, too, which is now the game’s representation of a barrier-to-exploration that endures until a way is found around it.) But I put a shout-out to it on the panel lore for Serpent Slumbering Beneath the Island so folks would at least know that yes, there’s volcanic activity on the island, and a Spirit of that sort might come along someday.

(This is one of two Spirits in Jagged Earth that a very early playtester has been hoping for / looking forward to for a very long time. The wait is over, Ricky!)

Every iteration of Volcano has centered around an eruption mechanic in which you build up Presence, then remove it in a blast (big or small, your choice). Early versions did some damage, but were more an explosion of Powers - Volcano had phenomenal energy income, but not very good plays, so when it's explosions let it play an extra Power Card per Presence destroyed it could blast out some phenomenal turns. But testers said this didn’t feel thematic enough, and indeed - if the power cards you drew weren’t very Volcano-y, you’d erupt for a huge blast of Open Blossoms and Accelerated Rot, which kind of funny the first time, but not very volcano-y. Successive versions have shifted further and further from that, so now it just does Damage and Fear - and possibly Blight.

Early versions also returned some or all of the Presence to your Spirit panel, both so that erupting carried a cost to your infrastructure, and so that you didn’t run out of Presence to erupt with if the game went long! That proved not super-fun, though, as well as really making small explosions a bad choice even when they were tactically useful, so it slowly got revised into a system where Volcano can renew from its self-destruction with the right elements.

One question that’s come up is how Blight - usually indicative of farming/colonization - can destroy a volcano. The answer is: it doesn’t! It wrecks the connection between the physical feature of the land and the Spirit, destroying the Spirit, whereupon the physical volcano has no volition and subsides into quiescence. For a Spirit like Volcano Looming High, it might yet survive by retreating to the cradle of the deep earth’s fire - but it’s knocked out of the fight with the Invaders, which means that they will eventually triumph.