Vengeance as a Burning Plague

on your starting board. 1 in a land with

. 1 in a Wetland without

Starts slow, facing an early choice whether to stop Builds (with

) or let them happen (to generate

on the island). Grows to be very effective at tearing into heavily-populated lands with lots of

, but setting those up may require some care... and make other Spirits unease, with how much 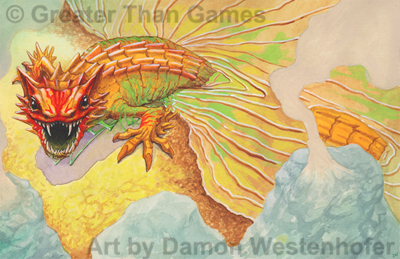 THE TERROR OF A SLOWLY UNFOLDING PLAGUE

would prevent a Build on a board with your

, you may let the Build happen (removing no

is destroyed by anything except a Spirit action, add 1

WREAK VENGEANCE FOR THE LAND'S CORRUPTION

on the island as also being

This Power's Damage is dealt (separately) to both Invaders and

A Spirit of vengeance, anger, and retribution. In its incarnation as a Burning Plague, it slumbers in a simmering volcanic pool, awakening at unpredictable intervals.... or when roused through supplication by one wronged. Most Dahan consider this foolhardy, for it vents its wrath on entire communities, and its pestilence may spread anywhere. Clans with a close relationship to Hearth-Vigil have less to fear, but still deem it wise - and humane - not to push their luck.

It is unclear whether its recent waking is due directly to the ravaging of the Invaders or to some Spirit's pleas.

The Dahan suspect that Vengeance is a Spirit of many forms, just as vengeance itself can run hot, or cold, instinctive or premeditated. There are certainly multiple Spirits that seem to fit the bill, and certain events from past generations suggest they are at the very least related or interlinked somehow, if not actually a single Spirit with unusually disparate manifestations. Showing a prudent caution, the Dahan call these Spirits by names that would not give offense should they be single or multiple.

(The name you see on the Spirit panel is a shortened version of what the Dahan usually call it, but “Vengeance as a Burning Plague that Scours All Those Who Remain Before It” doesn’t fit in the layout. In the Dahan language, monikers given to Spirits are titles, with longer names being more formal. While this displays a certain form of respect, it is also distancing, a politeness which either acknowledges a Spirit who is powerful but has little to do with the Dahan, or implies a desire that the Spirit and Dahan keep separate both socially and physically. Shorter name-titles usually convey a different sort of respect, implying some sort of connection or closeness which merits the familiarity… though there are exceptions.)

After the diseases brought by the Invaders started to sweep through the Dahan population (5 or so years prior to the game’s start), many Dahan leapt to the thought that someone had awoken Vengeance as a Burning Plague. There was a great deal of bitterness and cursing whomever had been so foolish - painful history has led them to view the Spirit a little bit like modern civilized nations view chemical warfare: everyone leaves it alone because it’s so terrible, and unleashing it just results in more pain all around.

Thankfully for the Dahan, Vengeance as a Burning Plague is currently venting its wrath on the Invaders, so its diseases are tailored towards them. The Dahan are not entirely safe - but when Vengeance is making the rounds, who is?

if Invaders are present.
For each

may move with each Pushed piece.
2
STRIKE LOW WITH SUDDEN FEVERS

Cost to Use: Target Spirit removes 1 of their destroyed

and 1 Damage in one of target Spirit's lands.
(This is your Power so

, even if you're targeting another Spirit.)

This Spirit has a lot of moving parts - it’s High complexity, partly for that reason and partly because it changes the game dynamics: it doesn’t try to prevent Blight so much as get even for Blight, and often prefers leaving Disease to linger, causing Fear and enabling Epidemics Run Rampant… but letting the board get more out of control. As the Spirits grow closer and closer to losing the game by Blight, It grows more and more powerful, in large part because of one Special Rule: Your Powers treat Blight on the island as also being Badlands.

When Invaders are damaged in a land with Badlands, they also take 1 Damage per Badlands. So in a land with 2 Blight, this Spirit can destroy a City by dealing 1 Damage - like, say, with Savage Revenge, its first Innate Power. Of course, Badlands also do bonus Damage to Dahan, and Savage Revenge damages Dahan: Vengeance tends to spill over even to those not deserving, so be careful with that.

Normally, stacking up multiple Disease in a single land tends to be weaker than spreading it out, but Vengeance as a Burning Plague benefits from disease-heavy lands in a variety of ways: it gets Power Cards when creating them, it does more damage there when Reclaiming, and they boost Epidemics Run Rampant. One of its Unique Power cards gives it some ability to move Disease, so after obliterating the Invaders in a land with 4 Disease it can spread some of those plagues to less controlled lands.

It shares territory poorly with Spirits who don’t handle Blight well (such as Sharp Fangs Behind the Leaves or Keeper of the Forbidden Wilds), but can still cooperate with them fairly effectively if each carves out a separate turf, working together along shared borders. With Spirits who can’t keep much of a lid on the Invaders during early-game, it may need to use its Disease for early board control more than Fear generation and other benefits; the hit in long-term power level is entirely worth it if it prevents an early loss!

The Kickstarter for the base game of Spirit Island did well enough to publish 12 of the 14 Spirits designed at the time. The remaining two, as many have guessed, played with Disease and Strife tokens. I was a little disappointed that they didn’t get printed then, since I had no idea at the time whether Spirit Island would do well enough to get more spirits out there at a later date. In hindsight, however, I’m actually quite glad how things turned out: those two Spirits got a bunch of extra development time that has been a real boon.

The Spirit which used Disease tokens was not the one you’re reading about now; it was a spirit of mists and disease. With the opportunity to reflect on its design, I concluded that Ted (lead designer) had been spot-on when he suggested that it was trying to do too many things at once, so I split its mechanical portfolio. The mists portion turned into Shroud of Silent Mist, and the Disease portion became Vengeance as a Burning Plague. As it turns out, each of those concepts has more than enough to occupy it!

One perennial problem with the original Disease-spirit was that the Disease-centric minor powers didn’t match up especially well with its elements (water, air, moon) - Infested Aquifers was good, but that was about it. For Vengeance as a Burning Plague, I chose its elements based on its overarching domains - in the minor/major decks, vengeance-y powers are strongly associated with Fire, and disease is strongly associated with Animal. On the Spirit panel, you’ll see two innates, one fueled by Fire and focused on vengeance, the other fueled by Animal and focused on disease; the Spirit can go in either direction in its Power Card picks - or try for both, though hitting both innates in a single turn (beyond lvl 1) is hard, you’ll usually need to trade off the two barring perfect cards or elemental assistance of some form.