Deprecated: The each() function is deprecated. This message will be suppressed on further calls in /home/customer/www/spiritislandwiki.com/public_html/includes/MagicWordArray.php on line 197
 Sweden - Spirit Island Wiki

[edit]
The Kingdom of Sweden
BASE DIFFICULTY 1

Swayed by the Invaders: After Invaders Explore into each land this Phase, if that land has at least as many Invaders as

.
Level
(Difficulty)
Fear Cards
Game Effects (cumulative)
1
(2)
9 (3/3/3)
Heavy Mining: If the Invaders do at least 6 Damage to the land during Ravage, add an extra

to land #4. On boards where land #4 starts with

to an adjacent land without

comes from the box, not the Blight Card. 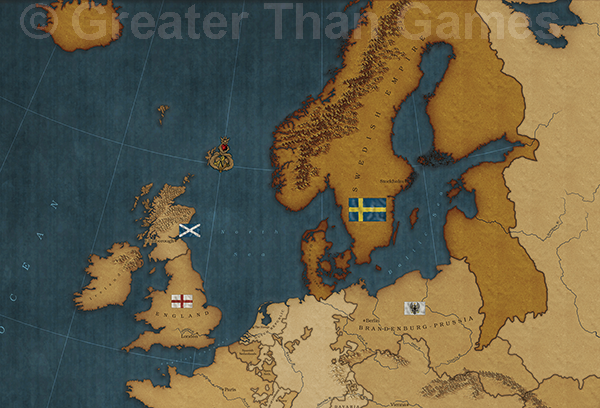 Part of the Base Game.

Following his triumph at the Battle of Lützen in 1632, King Gustavus Adolphus led the Kingdom of Sweden to further victories over Catholic armies, defeating and partitioning the Polish-Lithuanian Commonwealth with Brandenburg and Russia in 1644. Following his death in 1651, Gustavus Adolphus was succeeded by his son, King Gustav III, who went on to defeat Kingdom of Denmark in a series of campaigns between 1657 and 1668 and secure total Swedish dominion over the Baltic Sea.

Gustav III was succeeded by his son Erik in 1683, who became the eight Vasa ruler of Sweden. Under his rule, constrained from further growth on the continent by Russia to their East and the Holy Roman Empire and Prussia to their south, Sweden begun leveraging their powerful navy to set up colonies throughout the world.

The absorption of former Polish lands in the eastern Baltic has given Sweden a significant influx of Slavs and other non-Scandanavian people. While a tremendous boon to their economic and military power, this demographic shift has also been a source of internal turmoil as the Kingdom of Sweden attempts the historically difficult task of integrating a multi-ethnic society. Along with a desire for more natural resources, Sweden's desire for a "safety valve" outlet for discontents and political agitators has driven their desire to establish themselves as a colonial power.

There are no rulings at this time.