on your starting board: 1 in the lowest-numbered Mountain without

; 1 in an adjacent land that has

Most of its special rules and innates require being where the Invaders are - particularly in the worst, most-overrun lands, so it can mitigate incoming Blight and (eventually) destroy the Invaders with their own Ravages.

Does best with the patience to build up a position over time, and the temperance to hold some Energy in reserve so it can take advantage of Hold the Island Fast With a Bulwark of Will. 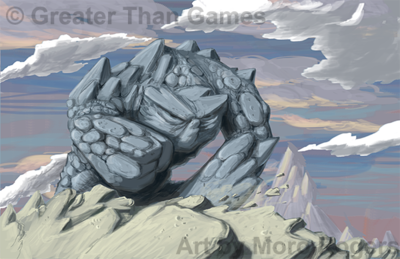 BESTOW THE ENDURANCE OF BEDROCK

is added to one of your lands, unless the

, it does not cascade or destroy

DEEP LAYERS EXPOSED TO THE SURFACE

The first time you uncover each of your "+1 Card Play"

spaces, gain a Minor Power. (They're marked with

HOLD THE ISLAND FAST WITH A BULWARK OF WILL

is added to one of your lands, you may pay 2 Energy per

to take it from the box instead of the Blight Card. (Handle any cascade separately.)
4

When an Event or Blight card directly destroys

(yours or others'), you may prevent any number of

from being destroyed by paying 1 Energy each. ("Directly" means "not by adding

LET THEM BREAK THEMSELVES AGAINST THE STONE

(Reminder: Defend reduces the amount of Damage that Invaders deal to a land.) 3

After Invaders deal 1 or more Damage to target land, 2 Damage.
5

Also deal half of the Damage Invaders did to the land (rounding down).
7

Some things refuse to break.

Underneath the soil and sand of the island lies rock, layer upon layer built up over the ages. Some stones weather quickly once exposed to the elements, while others are sterner and harder. Stone's Unyielding Defiance is a Spirit of that stone which resists being shattered, moved, or shaped to the will of another.

It is capable of tremendous feats of resilience and obstinacy, particularly when confronted head-on in a belligerent fashion. It's not unfriendly to other Spirits or the Dahan, but it works with them on its own terms.

From the Jagged Earth Update

Stone lies under everything. All on its own, it's not necessarily the friendliest of environments for large-scale life, but it's still part of the living earth - over time it weathers to help form soil, after all. Until then, while it may not be nourishing like a lovely regolith full of organic matter, it's supportive and durable and makes great homes for all manner of plants and animals. In some senses, Spirit Island is made out of rock. (In other senses, it's made of a giant serpent, and in others still it's made of a volcano. All these things are true, and more.)

Stone's Unyielding Defiance is a Spirit of one particular type of stone: that which won't get out of your way and you just can't budge. (This can take many physical forms; andesite and rhyolite are common ones.) The Dahan are no strangers to quarrying, nor to discussion and negotiation with local spirits over whether and how such quarrying might proceed in a way that works for all concerned, but with Stone's Unyielding Defiance they don't even try - they'll inquire once, politeness masking frustration, and head home when it refuses.

(Once or twice, someone has tried to match its stubbornness, in hopes of winning its respect. This has worked insofar as the respect is concerned, but failed utterly in terms of actually changing its answer. It has occasionally decided of its own volition to gift Dahan villages with building-pillars, however. These endure better than any others and are always appreciated when a village moves back to one of the old sites which has one. None have yet needed to be replaced, despite the passage of centuries.)

Important note: If playing as Stone's Unyielding Defiance, you start the game with these Unique Power Cards in your hand.
2
Scarred and Stony Land

in the target land from the game. (It goes to the box, not the Blight Card.)
Spirit Island Card Katalog
1
Stubborn Solidity

in target land cannot be changed.
(When they would be Damaged, Destroyed, Removed, Replaced, or moved, instead don't.)
Spirit Island Card Katalog
0
Jagged Shards Push From the Earth