A build-your-own-Spirit, capable of going in many different directions based on Elements picked, Growth choices selected, and Power Cards kept. Has a very high personal/visual complexity and a huge number of early-game options, but doesn't alter play much for other players at the table.

As it commits to choices, it loses versatility - not all paths will be good (or even possible) at all things. It especially wants a measure of adaptation to early Power Cards, rather than trying to pre-select a strategy. 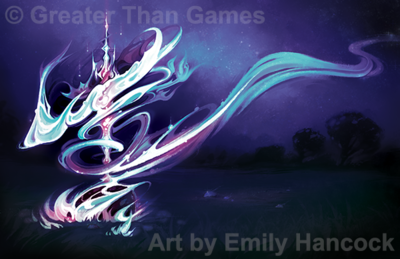 GROWTH BEGETS GROWTH
You have 6

tracks. (As usual, you may add

tracks are next to rows of Growth choices: these choices start unavailable. Upon emptying a Growth track, pick one of its two Growth choices to be immediately available. The other stays unavailable for the rest of the game (cover with a spare piece).
After you add

from a space marked

SLOWLY COALESCING NATURE
After revealing a

, place 1 Element Marker of your choice on it. That element is permanent and is constantly available (As if pre-printed on the

Choose a Spirit with

in target land. They gain a Power Card.

Instead, Gather up to 3

Stars Blaze in the Daytime Sky

. Gain 1 Energy. Reclaim up to 1 Power Card from play or your discard pile.

SUMMARY OF POWERS Use the Template:Powersummary

Every once and again, where starlight falls to ground there arises a new Spirit. Its essence is initially that of the stars and nighttime sky, but from the moment it touches the island it begins to change, adapting and reimagining itself for its new home. Only a few of the island's Spirits came to be in this fashion, but many of them have been memorable.

This one arrived after the Invaders started to spread, striking the earth where they had cleared land for farming. Fragile and new, it was saved from dissolution by Stone's Unyielding Defiance, and in gratitude fights the Invaders even as it seeks to define itself.

The natural world is not static, and neither are the Spirits. Individuals among them grow and change, both reflective-of and reflecting-into the parts of the world that they embody. Spirits can cease to exist, either slowly fading away, being severed from the vital life of nature, or through the cessation of portions of the world they cannot do without. They can transform, their nature fundamentally shifting. And new Spirits can come into being, either coalescing around the existing, or via the genesis of the new.

Usually, when Spirits arise, they embody or represent something right from the get-go. There is, however, something different and unusual about the light of stars. While there do certainly exist Spirits of the night and nighttime sky, when starlight itself falls to earth (common) and brings a Spirit (much rarer), that Spirit arises unattached to any facet of nature, other than a lingering and fading connection to the stars above. Over its first hours, months, years of its existence, it transforms, forming connections to local places and aspects of nature, becoming something altogether new.

Are the stars themselves immense Spirits, slower-moving than any on the island, but so powerful they create children from across the vast reach of sky? By the time starlight-Spirits understand this question being posed to them, they no longer remember whether it is true.

Important note: If playing as Starlight Seeks Its Form, you start the game with these cards in your hand.
0
Shape the Self Anew

Gain a Minor Power Card.
You may forget this Power Card to gain 3 Energy.
If you have:
4

You may gain a Major Power instead of a Minor Power.
Spirit Island Card Katalog
1
Boon of Reimagining

Target Spirit may Forget a Power Card from hand or discard.
If they do, they draw 6 Minor Power Cards and gain 2 of them.
If you target another Spirit, they gain 1 Energy.
Spirit Island Card Katalog
1
Peace of the Nighttime Sky

If the Terror Level is 1, Invaders do not Ravage in target land this turn.
You may Repeat this Power. If you do, Forget this Power Card and gain

At the end of turn after discarding, Reclaim up to 2 cards to your hand.
You may then Forget a Unique Power Card to Reclaim up to 3 additional cards.
Spirit Island Card Katalog