This Spirit is not an official Spirit; it is not sold as part of any expansion. This Spirit is an Apocrypha Spirit. Click here for more on what that means.

on your starting board, in the highest-numbered Wetland.

A bit messy - wants to splatter

everywhere but they get removed by Invader Actions, and wants to stockpile Rot but doesn't keep all that well.
Gains and spends/loses Rot in a lot of ways - paying close attention results in an intricate and finicky stockpile-management game, playing more fast-and-loose works but incurs some inefficiency and missed opportunities; pick your style. 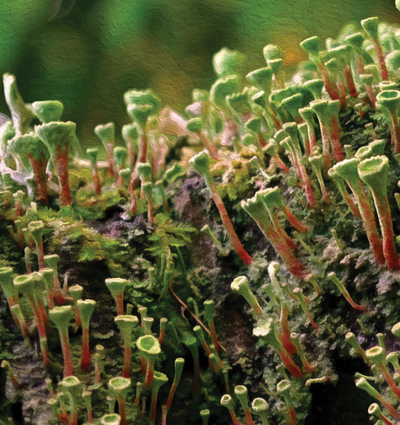 Part of the Apocrypha Spirits.

SLOW CYCLE OF DEATH AND REBIRTH
You have a resource called Rot. Use spare

During Time Passes, lose half of your Rot (round up) and gain Energy equal to half the Rot you lost (round up).
?

Eric Reuss: On reflection, both Rot loss and Energy gain would probably be better as (round down) rather than (round up) - slightly less Energy income (especially early game), slightly better Rot stockpiling.

BODIES FEED THE EARTH
After Invaders/

are destroyed in your lands, Gain 1 Rot. (For this rule, treat removing

SETTLEMENTS CRUMBLE WITH DECAY AND PLAGUE
In your lands with

Upon death, wood and flesh alike decay and return to the land, leading to further life and part of the natural cycle of renewal and fertility. The remains of a single tree will feed a myriad of mosses, molds, and fungi; the body of one large animal makes a banquet for insects and - indirectly - the soil.

Spreading Rot Renews the Earth is one of countless Spirits which partake of this cycle. However, it's somewhat more aggressive than most about acquiring nutrients for the earth and building up massive mats of choking fungus. The Dahan appreciate its place in nature, but try to keep their distance from where it's most active. The Invaders are not so lucky.

Important note: If playing as Spreading Rot Renews the Earth, you start the game with these Unique Power Cards in your hand.