Constantly shifting and moving its

around the board. Hurt more than most by

loss due to its desire to surround and envelop the Invaders.

Can (slowly) clear the most built-up of lands, but its real strength is the free Fear from Slow and Silent Death.

Extremely limited Energy income, but can stretch to Major Powers if it manages to gather enough Energy from its Special Rules. 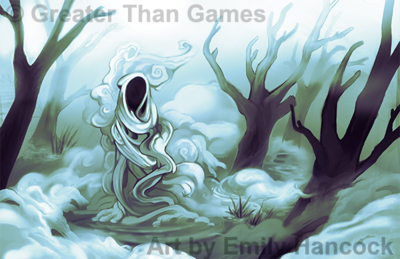 GATHER POWER FROM THE COOL AND DARK

Once a turn, when you Gain a Power Card without

When targeting a land with a Power, you may Gather 1 of your

into the target or an adjacent land. This can enable you to meet Range and targeting requirements.

in your lands don't heal Damage.

For each adjacent land with your

, 1 Damage to a different Invader.

1 Damage to each Invader.

LOST IN THE SWIRLING HAZE

A spirit of dissolution and the cold silence of death, creeping quietly down from the hills and across the open waters. Its trail is adorned with dew-covered leaves and the bones of small animals.

Some legends say Shroud of Silent Mist came from the final breath of a Dahan spirit-speaker who spoke too freely of secrets entrusted to him, for which is soulform was afflicted with a deathbringing curse. Others claim it was born from the legends and tales rather than from any actual person, for the story of Kadura shows that human and Spirit do not so readily transform into each other.

With wetlands, mountains and high-humidity jungles during the rainy season, Spirit Island has plenty of Spirits of mist and fog. Among them are Morning-Glow, a smallish Spirit that lives near a few Dahan villages and manifests as striking patterns of light in the dawn's first rays, then sleeps for most of the day and night; Tide of the Forest's Breath, a dense fog that rolls down from certain mountain peaks; a Spirit called different names on different parts of the island that rises where the sun beats down on wet sand (often near the ocean); and Shroud of Silent Mist, the mist which silently flows in, bringing quiet and slow dissolution in its wake.

(The Spirit's name is an inexact translation; the Dahan don't generally use burial-shrouds. One word being translated refers to the mist-like clouding of the eyes with age and/or death, and another word brings in association of muffling or enfolding cloth. But attempts at literal translation such as "Attenuating Death-Cataract Enfolding-Blanket" mangle the poetry of the original, and completely miss the allusions to mists and cold, so "Shroud of Silent Mist" is, all in all, a better representation.)

Shroud of Silent Mist is one of those Spirits where knowledge of its nature helps greatly in dealing with it. It doesn't (usually) kill humans quickly at all; while there are stories of those-who-travel dying overnight in a mist-shrouded dell, the reality is that the danger it brings is on the scale of months to years: the mists seep in (perhaps just at night, at first), and everyone feels a little lethargic, a little cold, a little not-quite-there, with a slightly harder time seeing or hearing or breathing as the world turns a pale silver-white. Then the mists stay - perhaps retreating for a day or two here and there, but always returning - and everyone keeps feeling a little worse, and a little worse, and a little worse, but it gets harder and harder to muster the motivation to do anything about it.

Those that manage to leave the area of the mists recover fully, given a bit of time. This may be easier said than done: if it's just manifesting in a small hollow or river-basin, you might win free easily, but more often the fog stretches all around for a much greater distance, and it's very easy to get lost in the pall. Overall, though, the Dahan consider Shroud of Silent Mist to be a very dangerous Spirit, but not always an imminent threat, between the slow pace of its enervation and the fact that it doesn't seem to bear the Dahan any specific ill-will. It might enfold a Dahan village for a few days then depart, leaving a few dead herd animals and a scattering of smaller wildlife. (Or it might stay for months and leave only the bones of those who lived there among the trees. If it shows up and you decide to stick around, you're taking your chances.)

There are stories that it once was a Dahan, and was somehow changed into a Spirit, cursed to wander silently bringing death. Most don't give this much credence, but it does make for a good tale.

.
0
Flowing and Silent Forms Dart By

if Invaders are present.
When

in target land would be Destroyed, its owner may, if possible, instead Push that

of another Spirit (with their permission).
1
The Fog Closes In

For each adjacent land with your

, 1 Damage to a different Invader.
Push 2

. Up to 3 damaged Invaders do not participate in Ravage.
OR
1

you have in target land (when this Power is used).