on your starting board in the highest-numbered land that is Sands or Mountain. Prepare 1

marker (put them by your Special Rules).

Starts with little ability to influence the board - most of what it does in that regard will come from new Power Cards.

Extremely good with Major Powers and usually wants to take them early and often. Can either try sprinting towards victory with its phenomenal Energy Growth or build up towards becoming a late-game powerhouse. 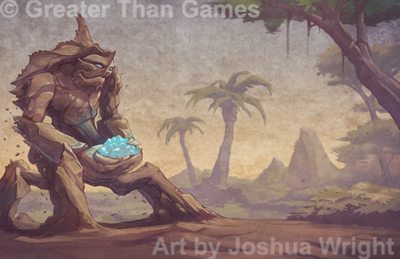 LONG AGES OF KNOWLEDGE AND FORGETFULNESS

When you would Forget a Power Card from your hand, you may instead discard it. (Max. once per Action.)

INSIGHTS INTO THE WORLD'S NATURE

Some of your Actions let you Prepare Element Markers, which are kept here until used. Choose the Elements freely. (I.e., you are not limited to Elements you have at the time.)

Each Element Marker spent grants 1 of that Element for a single Action. (E.g., one Power use.)

Instead, Defend 2 per card in the Invader discard pile.

Instead, after each of the next three Actions that change which pieces are in target land, Prepare 1 Element Marker.
(You can stack the markers you intend to take here or on the target land so you don't need to ponder on what to take mid-turn. Any Action can trigger Preparing a marker, not just your own.)

Can change radically and quickly with early major powers.

An immensely old Spirit that has ascended to great power countless times over the ages - and then destroyed that power each time, severing huge pieces of itself to become small once again. It does this in part for the thrill of learning anew, but also for the delight of perceiving the living world on the short timescales that larger Spirits grow beyond.

The Invaders' arrival has pushed it to grow much more quickly that it usually would, re-learning lessons and powers from its deep past in order to fight more effectively. After the fight is won, there will be time to forget, to diminish, and to renew itself once more.

Shifting Memory of Ages has been a Spirit of many things over the eons: they are both a Spirit of self-change and of self-memory. To understand the source of this tension within them, you must understand something of the nature of Spirits.

The larger and more powerful a Spirit is, the slower the time frame in which they act: the tiny Spirits of leaf and dewdrop are nearly impossible to communicate with, as a single day for a human is a long eternity to them. (And their knowledge of the world is extremely localized, though still intricate within its bounds.) Most Spirits the Dahan deal with regularly are a touch larger: the Spirit of a single path, of a small glade, of a riverside pool. Not all such places have/are Spirits, but neither are they are especially rare. These Spirits are still fast-minded enough that they may seem somewhat flighty or forgetful to humans, but they will respond to a call, a dance, a pattern, a song.

Spirits who perceive the world on a timescale similar to humans are a bit larger, a bit less common, stay a bit more removed from humanity on average - and the correlation continues, all the way up to Spirits so vast that they could make the Invaders vanish with a thought… but might erase the island in the process, and in any event by the time they acted, they would be far, far too late, as they measure millennia with their breath.

(The Spirits you play start the game in a sweet-spot of “small enough to act on human timescales, large enough to impact the Invasion”. The slowdown that comes with growth is not instantaneous - more like an accumulation of drag over time - so you’re able to ramp up to a combination of speed and potency that Spirits don’t normally exhibit except during the process of such a change.)

Shifting Memory of Ages is an ancient Spirit that has always loved learning, and growing, and understanding. Long eons before humans, they grew to a great ascendancy of power and knowledge. With that greatness, they stopped perceiving the world on the scale of sunrise and sunset, instead of resonating to the deeper rhythms of seasons, of years, of weather-cycles and climate and tectonics…

…and they found that they missed what they had been. Not that they desired ignorance, but they wanted to be able to bask in the slow and perfect glory of a sunset; to hear how the river sounds during different types of rainfall; to watch the antics of this animal or that growing up as an individual rather than perceiving a new generation every time they blinked. They wanted a certain experience of the world that was incompatible with what they had become.

So they changed. They carefully identified, located and protected those parts of themselves that were most core to their being, then slowly let go of everything else: ties to the land, modes of thinking and being, a billion treasured memories, and more. They made themselves small so that they might see the world with young eyes once again.

(This is not a usual thing. Spirits may become diffuse or fade or may shrink as the thing-they-are diminishes in some way, but those which grow-and-diminish cyclically generally do so on a much smaller scale.)

Shifting Memory of Ages found existence different the second time around: they retained aspects of understanding they hadn’t had during their first nascency, learned new things, and grew in different directions (despite the occasional feeling of strange familiarity and ease when they re-discovered something that resonated with their prior self). But their core aims were realized, and they rejoiced in seeing the world with fresh eyes! Since then, they have risen to ascendancy over and over, followed each time by this deliberate forgetting-of-self, a return to beginnings with a mostly - but not entirely - blank slate.

The threat posed by the Invaders has caused Shifting Memory of Ages to accelerate their cycle, progressing along half-familiar paths of power more quickly than they otherwise would. If victory is achieved, they can pause and diminish once more, after making sure that the lessons of the conflict are remembered by some on the island.

Important note: If playing as Shifting Memory of Ages, you start the game with these Unique Power Cards in your hand.
1
Boon of Ancient Memories

If you target yourself, gain a Minor Power.

Otherwise: Target Spirit gains a Power Card. If it's a Major Power, they may pay 2 Energy instead of Forgetting a Power Card.
Spirit Island Card Katalog
0
Share Secrets of Survival

would be Destroyed in target land, Destroy 2 fewer

:
You may do both.
Spirit Island Card Katalog
0
Elemental Teachings

Discard up to 3 Element Markers. Target Spirit gains those Elements.

(They can be any combination of Elements - the same or different.)
Spirit Island Card Katalog
0
Study the Invaders' Fears