Sharp Fangs Behind the Leaves

on your starting board in the highest-numbered Jungle. Put 1

in a land of your choice with

anywhere on the island.

All about Beasts and Jungles. Can be very fast out of the gate, but doesn't have the late-game power that some spirits do, and is likely to have some difficulty with Blighted areas. "Ranging Hunt" is a critical Innate ability, particularly in early-game: it simultaneously gives Beasts mobility and permits picking off a stray Explorers or Towns on most turns. 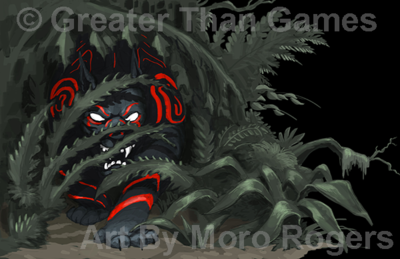 ALLY OF THE BEASTS
Your

moves from 1 of your lands to another land, you may move 1

CALL FORTH PREDATORS
During each Spirit Phase, you may replace 1 of your

leaves the game. (It was not destroyed, so things which return destroyed

cannot bring it back.)

You may Push up to 2

A predator-spirit of the jungles, a stalker and hunter of animal and human alike. Wherever it lives, savage beasts emerge to hunt, and the jungle grows dark and ominous.

Sharp Fangs doesn't bother talking to the Dahan. Sometimes it will hunt them, or run them off, but for the most part it ignores them. The Dahan's legends tell of a time when Sharp Fangs hunted them more actively, until a pair of warriors - twins, sister and brother - drove it off with traps and guile, then turned the tables and hunted it down. Since then, it has seen the Dahan as not-entirely-prey, which, for it, is something akin to respect.

Sharp Fangs Behind the Leaves is a predator-spirit, half-seen stalker in the jungles, hunter of prey large and small. This most emphatically includes humans - though a pair of heroes long ago won the Dahan the status of "not entirely prey", and with it an uneasy semi-reprieve from its more active predations. Still, the Dahan know better than to stick around too long when it moves into an area to stay.

Where it lairs for any length of time, the jungle becomes a hunting-grounds, and not just for its own hunts - Sharp Fangs can bring the aggressive and predatory instincts of other animals to the fore. Creatures that ordinarily might be dangerous only when provoked become actively marauding threats, or even driven into a berserker frenzy if it suits Sharp Fangs' purposes. It's not that it lives for the hunt and the fight: it is the hunt and the fight, the way that Lightning is lightning and Earth is earth.

1
Prey On The Builders

.
If target land has

Invaders do not Build there this turn.
1
Teeth Gleam From Darkness

OR
If target land has both

in target land.
IF you Pushed any Invaders, 2

Some things of note:

Overall: Sharp Fangs is exceptionally good at keeping the Invaders from taking over new lands, through a combination of eating Explorers and its Power Card "Prey on the Builders". It's fast out of the gate, then continues to grow slowly in power, especially as more Beasts come onto the board (giving it more options). Some of the low-cost Major Powers which use Beasts are very appealing for it, so it may go looking for a Major Power or two, but is likely to focus more on Minor Powers due to its high level of activity (Card Plays). It does have trouble handling Blighted lands, which are immune to both Ranging Hunt and Teeth Gleam From Darkness, so may want to draft some Blight removal if its allies don't manage to do so first.

Sharp Fangs Behind the Leaves/Antistone's Opening[1]

Sharp Fangs Behind the Leaves/Vladvonbounce's Guide[2]