From Spirit Island Wiki
Revision as of 23:50, 3 October 2017 by Lynkfox (talk | contribs) (Created page with "{{Spirit |gamebox=Core |setup=Put 3 {{presence}} on your starting board: 2 in the highest-numbered Jungle and 1 in land #5 |playstyle=Good at causing Fear and picking off lone...")
(diff) ← Older revision | Latest revision (diff) | Newer revision → (diff)
Jump to: navigation, search 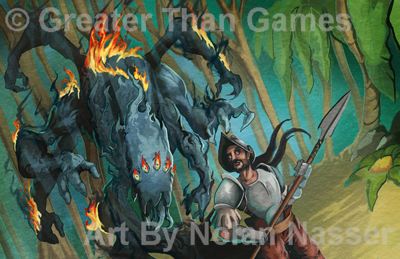 SHADOWS OF THE DAHAN
WHenever you use a Power, you may pay 1 Energy to target a land with

This spirit invokes an instinctive fear in humans, perhaps because it doesn't think at all like humans do - it's more alien-minded than most. Until a few generations ago, the Dahan careful propitiated it only at a distance, steering as clear as they could. But during the Years of The Relentless Sun, it shaded large swaths of the Island, averting catastrophe; since then, many Dahan have been willing to carefully - and cautiously - heed its words, feeling they have a debt they out to try to replay.

Spirits corresponding directly to natural features make instinctive sense to human minds: "the spirit of this river here", or "a spirit of stormy wind" are straightforward and easy to grasp. Some spirits are more inscrutable, such as the Keeper of the Forbidden Wilds, or harder to perceive, such as the Serpent Slumbering Beneath the Island. And then there are others still whose nature simply does not mesh well with humanity's view of the universe, such as Shadows Flicker Like Flame. It is the shadow of a candleflame; a fire that withers what it touches rather than igniting it; the dark silhouette of a tree cast across the ground which, when you step on it, turns out to be a pit of ink-black otherspace. Its form is as fluid as as smoke, rising up from any shadow lying on the ground. Shadows Flicker Like Flame does not seem to represent any natural phenomenon known outside of itself, but is associated with shade, transformation, shadows given life, unnatural spaces, and engulfing dark. While it is not a spirit of terror per se, it evokes a primal fear in humans, both due to its associations and the alienness of its nature. It seems to honor its bargains, but it thinks along strange lines... and when it's near, you're never entirely sure that you won't just vanish. Other Spirits do not seem to find Shadows Flicker Like Flame the least bit unnatural, however; perhaps humanity's view of nature is not perfectly complete.