Serpent Slumbering Beneath the Island

on your starting board in the land #5.

There are several ways to play the Serpent, but all require patience: early game involves slowly building up Powers and Presence. It's not helpless during this time, but it isn't as effective as anyone else. It becomes incredibly powerful after awakening, but getting there requires a lot of time.
Make sure to Absorb Essence before you run up against your Presence cap - and to get other players' buy-in before using Absorb Essence on their Presence. 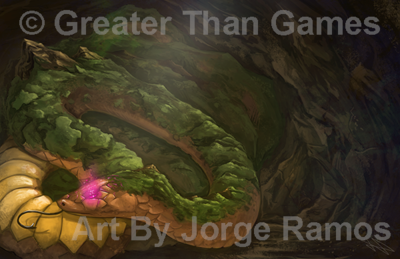 Part of the Promotional Packages.

DEEP SLUMBER
You start off limited to 5

on the island. Raise this with your "Absorb Essence" Power Card. Each use covers the lowest revealed number; your

. Other spirits with 2 or more Absorbed Presence may do likewise.

Gain a Major Power without Forgetting. Other Spirits with 3 or more Absorbed Presence may do likewise.

-7 Cost: In every land in the game: X Damage, where X is the number of

you have in and adjacent to that land.

Long ago in an earlier age, there was only water where islands now lie. One day - for there were day and night by then, though humans did not yet exist - a great serpent grew tired of swimming and decided to rest. It drew the earth up around itself, and so the island was born. Other stories say different things - in particular, Volcano Looming High has its own account - but stories do not need to agree for them to be true. Regardless, many spirits can sense the immense serpent deep below. It is mostly asleep, and its influence on the land above is limited, but the Invaders' Blight already begins to sting it towards greater wakefulness.

Let's shift our sight so we see only spirits. There are throngs of them visible across the surface of the island: spirits of tree and glade, of rushing river and entangling vines, of beast and butterfly and mists floating eerily over the marshes. Turning our vision downward, we see nearly as many within the land itself: spirits of hard unyielding stone and of drifted sand dunes, of sinkhole and high peak. Vital Strength of the Earth is here. As we look deeper, fewer spirits greet our eyes - some of volcano, some of dark and ancient caves, a handful of others. But like the earth itself, most of those we see are large, powerful, and slow. Deeper and larger than all of those lies the Serpent Slumbering Beneath the Island. It could be argued that it is the Island, or at least its roots. Like all spirits of such size and power, it is slow beyond human reckoning. Unlike many of them, it is also asleep. Or, now, mostly asleep. The distant sting of the Invaders' blight has begun to rouse portions of its consciousness towards waking, those fragments aware of the land's surface far above. Even that small aspect of the Serpent is slow to act, slow to awaken... but contains the potential for power greater than most spirits could ever muster.

from the board to your "Deep Slumber" track. Absorbed

and 1 Energy.
1
Gift of the Primodial Deeps

Target Spirit gains a Minor Power.
Target Spirit chooses to either: Play it immediately by paying its cost
OR
Gain 1

Target Spirit gains 1 Energy.
Target Spirit chooses to either: PLay another Power Card by paying its cost.
OR
Gain 1

Defend 2 in target land and all adjacent lands.
For every

on your "Deep Slumber" track, Defend 1 in target land and all adjacent lands.

What jumps out at us?

Its Unique Powers show us another aspect of the Serpent:

Overall: Fighting alongside the Serpent requires an awareness of its limitations (slow start, occasionally needs to chow down on someone's Presence) and of the benefits it brings to its allies (energy, power cards, additional plays, and more). It's far from powerless in early-game - the element and card-play boosts it gives to allies can push them over into higher-level Innates much earlier than would normally be possible; it can damage buildings with its Serpent Rouses in Anger innate; and it can grab an early Major Power if it so chooses - but it can only manage one or perhaps two things a turn, and is nowhere near as good at defense as, eg, Vital Strength of the Earth. Its allies should expect to pick up some of the slack in early-game, but will reap the rewards in later-game... if the island can survive that long.

Serpent Slumbering Beneath the Island/jyonker13's Opening[1]

Serpent Slumbering Beneath the Island/pktt's Guide[2]