Difference between revisions of "Second Wave" 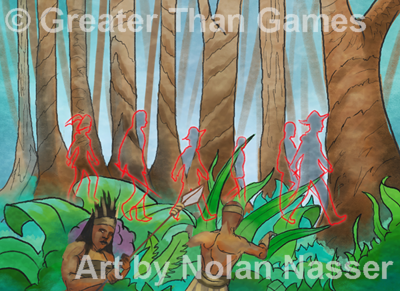 The Invaders have been drive off once, but they are not staying away, and the Spirits who first defended the island have grown to powerful and slow to react to this second wave of Invaders. Can a new set of spirits rise to the occasion and keep the island safe?

|rules= After the First Game Each Spirit sets aside one Power Card to assist with the next game. (See "Assistance from the first Spirits"), on reverse.) Remove all

and Invaders. Leave on the island:

to the lowest-numbered land with

until there are 8 or fewer.

|blurb=This Scenario is played as a follow-up game, set decades later. you play different Spirits in the second game, fighting against hte same Adversary. |assistance=Once Stage 3 begins the Power Cards set aside from the first game may be "played" (during the Spirit Phase, as usual). They cost nobody any Energy or Card Plays, grant no Elements, and may target any land. Thresholds trigger if they require 10 or fewer Elements. Each one is discarded after one use (or at the end of the game, if playing further waves). |table=Later Waves

If you want to play further waves, most rules from the reverse side remain the same. The only changes are: