Difference between revisions of "River Surges in Sunlight"

on your starting board in the highest-numbered Wetlands.

While capable of some direct offense, River Surges in Sunlight is best at flooding out Explorers and Towns, displacing them from lands where they might Build or Ravage.
The ability to get free Sacred Sites makes a wide range of Powers more useful. 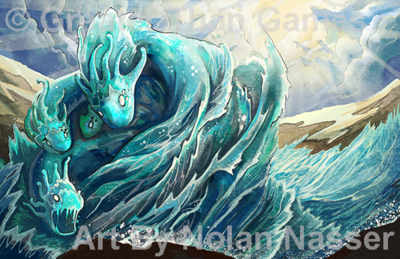 in Wetlands counts as

Instead, 2 Damage to each Invader.

On most of Spirit Island, the rivers run high during the rainy season, as one would expect. There is one exception: the lingering remains of an ancient curse keep a high ridge shrouded in ice, and when the sun beats down, it feeds a single river with abundant meltwater.

River Surges in Sunlight is a spirit of rushing water, inundation, and bounty out of season.

It gets along well with the Dahan who farm along its banks; they reap the benefit of good harvests, and tend to the health of the river in its drier times. Both gain.

River Surges in Sunlight is one of the greater river-spirits of the island, at least among those moderate enough in their locus of power to still interact readily with humans. (Joining of Three Rivers, for instance, is much larger and more powerful, but sluggish even by spirit standards, and very difficult to contact in any but a few very particular, well-worn ways.) River Surges has a well-established symbiotic relationship with the Dahan, who gain fertile ground from its controlled flooding and gifts of health from its magic; in turn, they tend to the river's needs during times of drought and darkness.

Like the river it embodies, it is a spirit of many moods: exuberant or subdued, curious or focused, playful in its power or grim under gray skies. For the Invaders, it brings its more destructive aspects: the force of rushing water, the destructive power of a flash flood, the inexorable rise of waters in a flooded land.

and gain 1 Energy.
1
Wash Away