onto your starting board: 1 in the Ocean, and 1 in a Coastal land of your choice.

Extremely good at assaulting the coasts where the Invaders start out strong, but quite weak island - the ocean is not accustomed to affecting events so far ashore. Its Presence shifts in and out like the tide, which can be tricky to manage, but permits re-positioning and tactical retreats or offensives in the hands of a skillful player. Has fairly inexpensive Unique Powers, but the energy gained from drowning Invaders can be necessary in stepping up to more potent Powers. 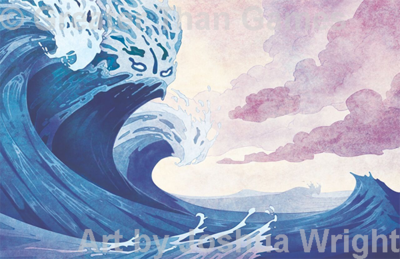 OCEAN IN PLAY
You may place/move

into Oceans, but may not place/move

into Inland lands. Oceans on boards with any of your

are treated as Coastal Wetlands for Powers and

. You Drown any Invaders or

moved to those Oceans.

DROWNING
Destroys Drowned pieces, placing Drowned Invaders here. At any time you may exchange (X) Health of these Invaders for 1 Energy, where X = number of players. (Ignore modifiers to Invader Health.)

You may instead Drown 1

The hunger of the ocean runs deep and powerful, sometimes patient, sometimes tempestuous and angry. It slowly wears away at rocky shores, or devours half an island during a hurricane. It lures humans out onto the water with its sire call, then consumes ship and crew alike unless the proper offerings are made.

The ocean's voraciousness keeps the Dahan from frequent sea travel, though they still manage a trading expedition every decade or so. These trading-trips take the cooperation of several families, and always involve at least two spirit-speakers. That way, even if one perishes abroad, the expedition will still be able to get home.

The seas around Spirit Island were not always so dangerous as they now are; when the Dahan's ancestors first arrived, the journey was no more (or less) perilous than any other voyage between islands. Several centuries ago, between the Second Reckoning and the rise of the Spirit-speakers, Ocean's Hungry Grasp arrived in the nearby waters. It has severely curtailed the Dahan's trade with other islands, though not extinguished it: expeditions are careful to propitiate the Ocean before setting out and upon their return. Some smaller ocean spirits still exist - some playful, some indifferent, some moody - but all are overshadowed by the hungry, waiting presence lurking deep offshore, and many have fled. Thus far, the tall-shipped Invaders have mostly escaped its attention, but that is sure to shift soon.

Ocean's Hungry Grasp is by turns tempestuous and patient; it may slowly eat away a rocky shore over centuries or devour half an island in a hurricane. It has an awful fascination to it, luring sailors to founder and people to hurl themselves into its embrace. The one constant is that it is always willing to consume more, until all things lie beneath the waves.

0
Call of the Deeps

.
If the target land is the Ocean, you may Gather another

from one of their lands.
If

are pushed into your Ocean, you may move them to any Coastal land instead of Drowning them.

Let's start with its special rules, because they're fundamental to understanding how the spirit plays:

Once we know this, some other things on the Spirit panel become clear:

Overall: Early in the game, Ocean is going to be primarily concerned with building up and building Energy while keeping the shorelines from getting too badly overrun. As it gets more Presence onto the board, it will gain in raw power level and in ability to target; all those Range-0 powers start being a little easier to find targets for. How it goes from there depends on a combination of which Presence track has been pushed, Power choices, and Energy availability: Ocean's hungry Grasp can grow into a whirlwind frenzy of Fear generation, a full-island "keep the shores under control" defender with moderate coastal offense on the side, or an immense stompy powerhouse slamming the coast with multiple Major Powers.