on your starting board in the highest-numbered Sands.

Virtually all offense to start with: without a more defensive teammate, Blight may become a problem. Excellent at destroying buildings, less good at containing Explorers. Using Thundering Destruction tends to be a burst affair: a turn or two of position and build up Energy, followed by a really big turn.
Starting Powers are extremely focused on Air and Fire: good for Thundering Destruction, bad for Major Power versatility. 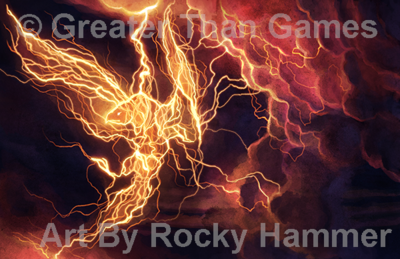 SWIFTNESS OF LIGHTNING
For every

Power as if it were

. (Power Cards or your Innate Powers.)

You may instead destroy 1

The child of a passing storm-spirit, Lightning's Swift Strike danced off the shores of the island many ages ago, and liked it enough to stay. It spends much of its time resting and quiet, waking up to dance through the sky when the winds blow strong.

It only concerns itself occasionally with the Dahan, usually appearing out of nowhere to send them off on some obscure errand. The Dahan cooperate - partly out of wary respect for Lightning's power, but as much for the sake of the Thunderspeaker - Lightning's child - who is a patron and ally of their people.

Most spirits of storm travel the sky, never touching down or staying in any one place for too long, but a few find a place they’re sufficiently drawn to to stay - often a site with high winds or violent weather. Spirits of lightning are especially prone to this, finding the earth below more interesting than their cloud-formed bretheren.

Lightning’s Swift Strike was born long ago, of a storm-spirit off the shores of Spirit Island. It decided to stay in the instant it first struck ground, and has remained ever since. Lightning destroys with a fierce and glorious joy, not for the sake of destruction itself, but for the exultation of swiftness-in-power.

0
Harbingers of the Lightning

if you pushed any

into a land with

Target Spirit may use up to 2

Powers as if they were

1 Damage to each Invader.
2
Shatter Homesteads

Some things of note:

Before we go into specific cards, we can see two things right off the bat:

Overall: Most of Lightning’s Powers do a small amount of Fear, plus any Fear caused by destroying Towns and Cities - so we can expect that Lightning will be decent at helping frighten the Invaders. The only way it has to destroy Explorers is Raging Storm, which is expensive: Lightning isn’t good at wiping out small groups of people hidden away in the jungle. But while it has a hard time stopping the Invaders from Building, it’s really good at wrecking those buildings once they show up! It can do this best in bursts - playing lots of Power Cards to trigger Thundering Destruction - but setting those up may take a turn of gathering strength.