THIS PAGE CONTAINS SPOILERS FOR HORIZONS OF SPIRIT ISLAND. THIS PRODUCT WILL BE TARGET-EXCLUSIVE UNTIL OCTOBER 2024. 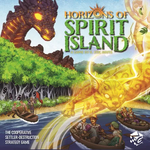 Horizons of Spirit Island, designed by R. Eric Reuss and Christopher Badell, and brought about by collaboration between Greater Than Games and Target, is the second standalone game for Spirit Island, meaning it is playable without the original base game. It has a focus on being an excellent entry point into the game with a low MSRP of $30 USD, as well as containing 5 Low-Complexity Spirits so that new players can quickly learn the rules of the game.

The announcement for Horizons of Spirit Island was posted on Greater Than Games's website on July 21st, 2022. The game was made available to purchase through Target in October 2022, and will remain exclusive to Target for two years from release.