Heart of the Wildfire

on your starting board in the highest-numbered Sands. (

comes from the box, not the Blight Card)

Starts with good offense and gets better from there, buyt lays down Blight as it grows. The smaller the game, the more restraint is needed to prevent tipping the island over into being completely Blighted. The Wildfire can heal the land where it is, but may benefit from other Blight removal Powers so it can add Presence to problem lands without triggering Blight cascade. Removing Blight from its own lands limits its "Firestorm" innate power, however.
In the Reprint, the complexity was changed from Moderate to High 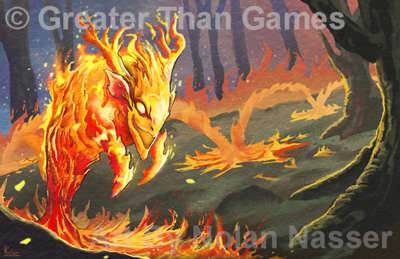 Part of the Promotional Package.

When you add or move

after Setup, in the land it goes to:

If you add multiple

into a land at the same time, only do the above effects once.

added due to Spirit Effects (Powers, Special Rules, Scenario-based Rituals, ect) does not destroy your

In a land with

. Destroy all Invaders and

If target land has 2

Burning, blazing, rising, consuming - Heart of the Wildfire is quite fond of humans, in a general sense: they keep hearths and use fire as a tool all the time, and those sparks give birth to so many lovely conflagrations! It is the nature of Spirits to be true to what they are, so even though Wildfire knows on some level that too much fire is bad for the land, it just doesn't think about that aspect of things very much. It is also, after all, a spirit of renewal after the blaze, so it implicitly assumes that everything will regrow eventually. (Its strong ties to A Spread of Rampant Green probably contribute to this point of view.)

It fights the Invaders partly due to the exhortations of other Spirits, but more for the sake of the Dahan, as it's become clear that the Invaders have no compunctions about putting them to the sword. (The Dahan and it have a long and storied history together, beginning with the very first Dahan settlements.) It is also, it should be said, somewhat gleeful over the chance to really cut loose without the other Spirits getting all riled up and putting out its firestorms.

A spirit of natural destruction... and renewal after destruction, though those whose lands have been scoured by flame don't usually much appreciate the latter. Thrives near human habitations, glorying in their fires and sparks, but has existed on the island since long before the Dahan arrived, a child of the Volcano and the Green.

The Wildfire is a long-standing friend of the Dahan: the early slash-and-burn agriculture which turned most Spirits against them gave it the best decades it had had in centuries. It later supported the Dahan during the Second Reckoning, backing their threats of reprisal. It doesn't interact with the Dahan often these years, but spares their villages as best it can, and fights the Invaders in large part for them.

Target Spirit gains 1 Energy. Target Spirit does +1 Damage with each Damage dealing Power they use this turn. (Powers which damage multiple lands or each Invader only get 1 extra damage total. Repeated Powers keep the +1 boost. Destroy effects don't get any bonus.)
0
Threatening Flames

per Terror Level from target land to adjacent lands without your

. If there are no such adjacent lands, +2

What about its Unique Powers?

Overall: Heart of the Wildfire is a high-complexity spirit. It has excellent offensive power, but its fires bring Blight to the land - and require some of that Blight to stay out in order for several of its offensive powers to work. In smaller games, it will have to be careful to avoid tainting the land (or outright losing), as the Blight it brings can be a substantial fraction of the available pool. In larger games, it'll have more leeway on Blight, but will face the problem of dilution: either the lands it sets up as deathtraps will be much sparser, or it'll concentrated be over in one corner and won't be able to help much in other portions of the board.