Sprawling Plantations: Before Setup, return all but 7

per player to the box. Invaders win if you ever cannot place a

.
Demand for New Cash Crops: After Exploring, on each board, pick a land of the shown terrain. If it has 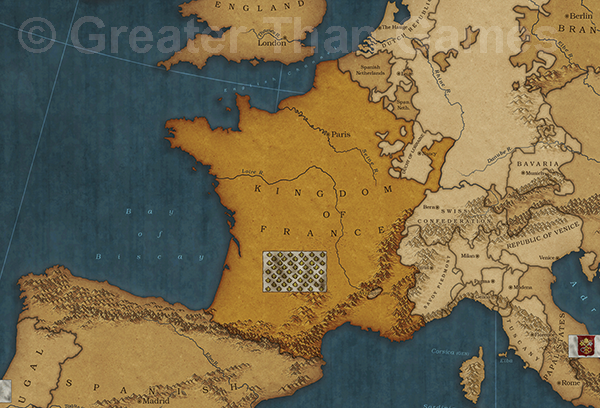 The French Plantation Colony is really a twofold Adversary: some of its effects are derived from historical France, while others are based off of the Caribbean plantation colonies founded by multiple European powers. Note that this is 1700s France - the policies and practices of later French colonization (such as homeland representation and strong public-health/infrastructure investment) are absent.

From the Rule Book

King Louis XIV, the longest ruling monarch in Europe, rules France with an iron fist but requires a constant stream of revenue to finance his wars on the continent. Recently involved in a war against Sweden and the Holy Roman Empire to place his grandson Philip on the Spanish throne, Louis relies on the strength of the French Army to hold together a tenuous alliance with Spain and Scotland against the Swedish, Habsburg, and Prussian Kingdoms.

Prevented from raising money from the aristocracy, and with a peasant population already suffering under some of the highest tax rates in Europe, he has begun setting up plantation colonies and extracting the resources of distant lands for the benefit of the Kingdom of France.