on your starting board: 1 in the lowest-numbered land with 1

, and 2 in the highest-numbered land without

. Deal 4 Minor and Major Powers face-up as your initial Days That Never Were cards; in a 1 or 2-player game, instead deal 6 of each. In a 1-board game, gain 1 Time.

Excellent at support and sweeping indirect effects, but starts off very limited otherwise. Several of its Unique Powers need setup to use well; it's entirely possible 1 or 2 of them may see no play in a given game.

Has a hard time getting lots of

onto the board. This can make targeting tricky, and may be quite dangerous if a Blighted Island effect Destroys 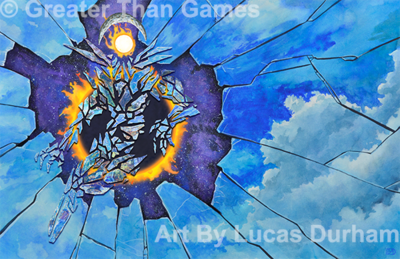 on this ability represents 1 Time. Many of your Powers require Time as an additional cost. Spend it when you Resolve the Power. (Not when you play it.)

track (or, optionally, the island). When you Spend 1 Time, return it to a

track - or if you have no free spaces, Destroy it.

DAYS THAT NEVER WERE

Your 3rd Growth option lets you gain any one Power Card from a special set you create during Setup. When you gain a Power Card any other way, you may add one unchosen card to this set.

Slip the Flow of Time

You may use this Power any number of times.

Cost to Use: 1 Time per previous use this turn. 3

Target Spirit may Reclaim 1 Power Card from their discarded or played cards. (If they Reclaim a card from play, they lose its Elements.)
3

Target Spirit may play a Power Card by paying its cost.

Visions of a Shifting Future

Look at the top card of either the Invader Deck or (if relevant) the Event Deck. Return it, then shuffle that deck's top 2 cards. (For the Invader Deck, differing Invader Stages may give away which card is next.)
2

Instead of returning-and-shuffling, you may put the card you looked at on the bottom of its deck. You may not do this for cards specially placed during Setup.

The sun and moon are short-term timekeepers of Spirit Island, measuring days and months with their rise and set, wax and wane. When they meet in a solar eclipse, time collides with time, sending jagged pieces of Was, Will-Be, and Might-Have-Been tearing through the weave of seasons and years. Gleaming vision-shards of future or past events may shimmer across the sky, but often those futures or pasts do not match what others know.

Fractured Days Split the Sky exists mostly in the high reaches of the heavens, but touches the island now and then, time and possibility flowing around it like a wind-blown mantle.

Spirits do not perceive time as humans do - see the recent update about Shifting Memory of Ages for one example - but there is still a certain orderliness to it. Days follow nights follow days, seasons follow seasons, years follow years, and if some events are unmoored in exactly when they happened, it is more that the structure is looser than human minds conceive, not that it lacks structure at all.

Fractured Days Split the Sky is a hammerblow to that structure, the periodic collision of sun and moon overhead. Or it might be the edges of Time, where the usual order cracks and splinters into pieces hanging out over the void. Or perhaps it is simply the eclipse itself, which by virtue of its nature wears Time around itself like a jagged cloak - few Spirits and no humans have the discernment to distinguish between these stories, and in the nature of Spirits and stories, they may all be true and untrue at the same time.

What is certain is that on Spirit Island, when a solar eclipse darkens the sky, fragmentary visions of past and future and present may appear in the air, ghostly but clear. Frequently, the visions are not of the past or future or present that those witnessing it know.

(Fractured Days Split the Sky is not, for the most part, a spirit of visions - these sights that swirl around it carry no unusual wisdom or import, and may be irrelevant - or outright deceptive - to the past-present-future in which the observer exists. If it focuses, it can feel out which fragments of future correspond to a particular present, but the very act of doing so tends to jostle the future about and make it less certain.)

It is a celestial Spirit, somewhat remote and not especially accessible the way that, say, a river-spirit or earth-spirit can be. It's capable of piecing together a humanoid puppet-form if it wishes to communicate with the strange scurrying upright-animal-things far below, but even this form made expressly for contact with humans is difficult for spirit-speakers to interact with; it conveys jumbles of sensory impressions from moments that never actually happened, or haven’t happened yet, a little bit like a modern human might piece together a paragraph by cutting out words from newspaper articles.

But celestial or not, it is connected to Spirit Island by ancient ties between land and sky. Both the island and this connection are threatened by the Invaders, so if an eclipse has happened recently enough for it to be present in strength, it will resist.

Important note: If playing as Fractured Days Split the Sky, you start the game with these Unique Power Cards in your hand.
1
Blur the Arc of Years

If Invaders are present: they Build, then Ravage.

You may Repeat this Power (once) on the same land by spending 1 Time.
Spirit Island Card Katalog
0
The Past Returns Again

Cost to Use: N Time, and Spirits jointly pay N Energy (where N = # of players).

Swap the top card of the Invader Deck with a card in the Invader discard that is within 1 Invader Stage of it.

to a different land with your

On the board moved from: During the Invader Phase, Resolve Invader and "Each board / Each land..." Actions one fewer time.

On the board moved to: During the Invader Phase, Resolve Invader and "Each board / Each land..." Actions one more time.
Spirit Island Card Katalog
1
Absolute Stasis

Until the end of the

phase, target land and everything in it cease to exist for all purposes except checking victory/defeat.

(You cannot target into, out of, or through where the land was.)

This cannot target an Ocean even if Oceans are in play.
Spirit Island Card Katalog