Deprecated: The each() function is deprecated. This message will be suppressed on further calls in /home/customer/www/spiritislandwiki.com/public_html/includes/MagicWordArray.php on line 197
 Finder of Paths Unseen - Spirit Island Wiki

on your starting board in land #3. Put 1

on any board in land #1. Note that you have 6 Unique Power Cards.

All about moving the Invaders - and

from time to time. Good at creating Invader-free "safe-zones," due to its many movement Powers and its capacity to Isolate. Can't afford to Destroy Invaders too often without a way to re-add Destroyed

, so either needs a big-hammer Major Power or to rely on its teammates for offense.

Changes the topology of the board, which increases complexity for all players - particularly in larger games! 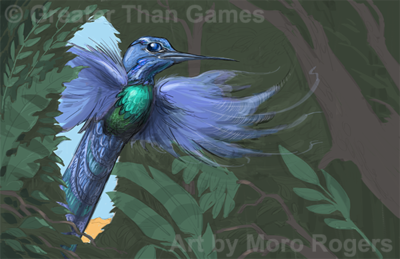 RESPONSIBILITIES TO THE DEAD

After one of your Actions Destroys 1 or more

/Invaders, or directly triggers their Destruction by moving them, Destroy 1 of your

and lose 1 Energy. If you have no Energy to lose, Destroy another

You may make up to two of your lands adjacent at a time. You may change which lands are adjacent once between Actions.[1]

Push up to half (rounded down) of Invaders from target land. Do likewise for

Push up to 1 Invader/

Target each level of this as a separate Power.
1

Finder of Paths Unseen is well known to the Dahan: it traverses the island with ease, and most spirit-speakers have met it at least once or twice. It communicates more straightforwardly than most Spirits, layering thought-sendings over its high-pitched trills. And it - or its assistants - sometimes help soulforms of dead Dahan move swiftly on, eluding those Spirits that seek to devour them.

It is almost commonplace... but also deeply enigmatic, even to those clans who call it Pathfinder. Does it locate paths, or make them? Is the other-space it moves through a realm, or a state of being? While it is occasionally willing to answer, its thoughts do not always translate well to words.

Finder of Paths Unseen is a Spirit of ways and paths, travelers and journeys, places and boundaries. The paths they travel seem to exist in another realm that weaves through and around our world - or perhaps this is just a trick of perspective, and it’s simply our world interacted with in a different way. Regardless, Finder of Paths Unseen interacts with place and way and journey in ways even most Spirits cannot.

They have good relations with the Dahan, some of whom are close enough to them to simply call them Pathmaker, rather than their more formal title-name. (Whether they “make” or “find” paths - or “uncover”, “open”, “enable”, or “empower” them - is something nobody can quite say; all those words are in good measure correct, but none of them exactly right.) Some older spirit-speakers acting as mentors or teachers will walk its paths with their students, reaching places on the far side of the island for an afternoon’s studies or conversation rather than having to make a trip of months or longer. This isn’t done trivially: the patterns that best please Pathmaker tend to be intricate and (from a human perspective) spread out piecemeal over miles, rather than a simple sketch scribed in beach-sand or ash. But given an excuse, they’re happy to help individuals and small groups; they may be enigmatic in some ways, but their nature is clearly not merely of paths, but of those paths’ travel (or forbiddance).

Finder of Paths Unseen is also an occasional psychopomp, helping Dahan soulforms move on promptly to wherever / whatever happens next. (The Dahan have been told by Spirits that yes, when a human dies, a non-physical portion of them continues to exist, at least for a little while. Then it becomes absent - not destroyed, simply “no longer there” - which the Dahan interpret as something roughly like “go somewhere else”. A handful of Spirits can - and occasionally do - prey on those soulforms, should they encounter them, and a number of Dahan death customs originate from the desire to misdirect or deceive these Spirits, just in case.) The Dahan consider hummingbirds in general as potential helpers of Pathmaker: some spirits associated with them and their realm appear as such, and even the physical birds may have some connection.

Important note: If playing as Finder of Paths Unseen, you start the game with these Unique Power Cards in your hand.
0

A Circuitous and Wending Journey 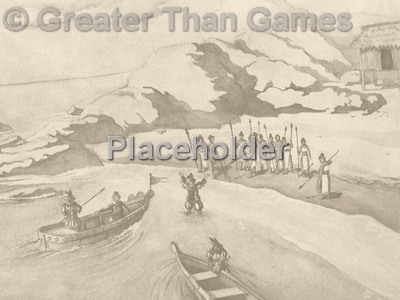 Push up to half (round up) of Invaders from target land.
Do likewise (separately) for

to a land within 2 Range that has

between target land and one of your lands.

would be Destroyed in target land, Destroy 2 fewer

to a land within 2 Range that has the same terrain.
Spirit Island Card Katalog

Target spirit moves up to 3 of their

to one of your lands.

Ways of Shore and Heartland

to a land that is also Coastal / Inland (whichever the target land is.)
Spirit Island Card Katalog