A card from the Event Deck. After the first turn, one Event Card is drawn and resolved each turn during Invader Phase, after any Blighted Island effect and before resolving any Earned Fear Cards. (See Sequence of Play for the full Turn Order.)

from the box atop the Event Deck as a reminder.

Most cards show two possible primary Events, both bad (see examples, below). Which you perform will depend on either:

Just like with other effects, when resolving Events, unless otherwise specified:

Players make any necessary decisions. When an Event says, “On Each Board: (do this OR that)”, you may select differently on each board. You are permitted to read the entire Event Card before making any decisions, but you don’t have to if your playgroup would rather think about one thing at a time.

Like other effects, when Events deal Damage unless otherwise specified, the Damage is done only to Invaders. Some Events modify Invader Damage, or do Damage to the Dahan (see Health and Damage, page 16). Events are only considered Spirit Effects (for, e.g., Heart of the Wildfire) if the Spirits pay a cost to make something happen (see Choice Events, below).

As seen below, some cards are Choice Events. These describe a situation and give the Spirits two courses of action to take with differing consequences. Usually, the choice is a joint decision, and players must reach consensus over which path to take. If no consensus can be reached, the first listed option is always the default.

Often, one choice has a cost: usually some amount of Energy per player in the game. The cost is paid jointly however the Spirits like; it does not need to be evenly divided. It could be paid entirely by one player.

If a cost says it is “Aided by a particular Element” it means that Spirits:

A Power Card may only be used for one of these bonuses. If you discard a Power Card, you cannot also Forget it. Also, a Power Card Forgotten from play no longer provides any Elements. The “Aided by” Energy is only for the purposes of paying the cost - you cannot get real Energy out of it! 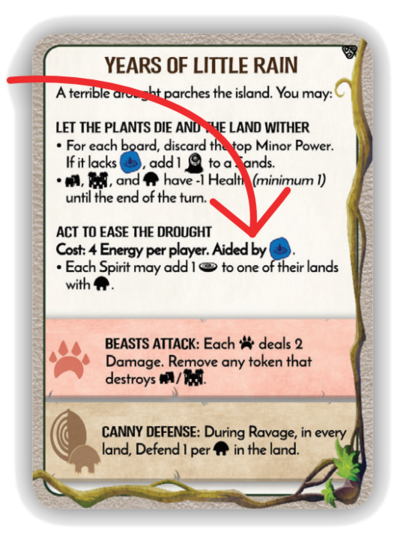 Meaningless Choices. If you are playing with the Scenario “Blitz”, the Choice Event “Outpaced” is guaranteed to be irrelevant, as there is no Slow Phase. If this happens - or if future Adversaries/Scenarios make a particular Event irrelevant or senseless - discard that Event Card and draw a replacement.

Thematic Boards: Instead of placing a single

on each board, place tokens as indicated by the Setup icons in each land.

Short on Space? If your table doesn't have space for the Invader Board extension, put the Event Deck near the Earned Fear stack, so you remember to do it first. 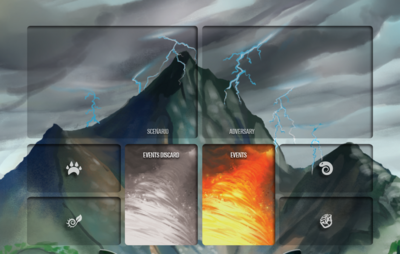 After Blighted Island and before Earned Fear Cards:

Draw and resolve one Event Card.

The "Blight Spreads" event appears on two Event Cards; the other one (headed by "Well-Prepared Explorers") is correct.