Proud & Mighty Capital: If 7 or more

are ever in a single land, the Invaders win.
Building Boom: On each board with

, Build in the land with the most 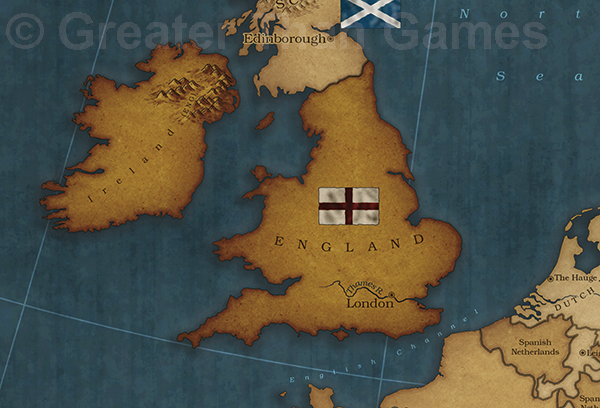 The alternate-history of the British Isles has taken a different course from our own: Scotland remains independent, for one thing, and while England is certainly powerful, neither it nor the other Great Powers of our own history are quite so dominant in this one.

Queen Elizabeth I of England married Robert Dudley, son of the Duke of Northerumberland, in 1562. The marriage was initially a scandal due to the suspicious circumstances surrounding the death of Dudley's first wife, and inspired a revolt in several noble houses. However, the co-monarchs Robert I and Elizabeth I grew in popularity after the suppression of the revolt in 1564 and the birth of their son Edward in 1566. With the defeat of an attempted invasion from Spain and Scotland in 1587, the Kingdom of England became one of the premier naval powers in the North Atlantic. After the death of Robert in 1588, and Elizabeth in 1603, their son Edward VII became King of England

England was only briefly involved in the religious wars on the continent in the 17th centurly. Following a disastrous invasion attempt in France in 1633, and a clash with Scotland in 1651, the Kingdom of England focused on fortifying the Scottish frontier and building up its naval power.

Unable to project power on the continent and constrained to southern Britain, the Kingdom of England was one of the first to seek colonies in the New World, using its oversas possessioins to provide citizens with opportunities that were increasingly hard to come by at home.