on your starting board in the lowest-numbered Wetlands.

Cares about the question "How useful is this Power in the current context?" even more than most Spirits; it rarely plays all its Power Cards in any given Reclaim cycle (some get discarded to Growth), and for those it does play, it often has the option of using them multiple times.

Benefits even more than most Spirits from having lots of Presence on the board, both for Rain and Mud Suppress Conflict and to facilitate its Unique Powers (by making more lands Wetlands). 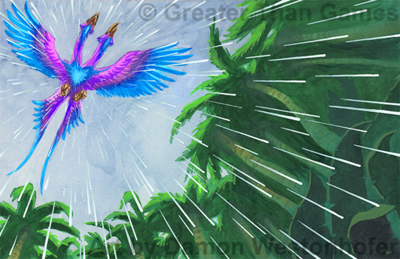 Part of the Promotional Packages.

as Wetlands in addition to the printed terrain.

POUR DOWN POWER ACROSS THE ISLAND

you have, during the

phase you may either:

Use scenario markers or spare game pieces to track uses of this rule. (Max 5 times per turn, no matter how much

counterattack damage by 1. (Total, in its land.)

. In your lands, Invaders and

Gain 1 Energy. You may remove 1

by removing one of your

would be added to target land, instead leave it on the card.

The deluge. As the Dahan say, "When the very air turns to water and the sound of rainfall drowns out all but the loudest of thunder, at that moment when it could not conceivably pour any more - and then suddenly, impossibly, it is raining twice as much - that is the downpour."

A Spirit of the high skies bridging to the earth below with a cascading torrent of water, rain blowing on the wind and soaking the ground. Flies back and forth across the boundary between water which brings life and growth, and water which overwhelms everything save the plants and soil entwined in each other's protection.

Spirit Island has a dry season and a wet season, but those descriptions are very broad. The wet season brings more frequent and heavier rains, but it doesn’t pour constantly - the skies do clear from time to time. And specific areas of the island have their own local variations in climate and rainfall.

Some variation also comes from the travels of Downpour Drenches the World, which flies across Spirit Island (and sometimes beyond), settling down in one place or another for days or weeks. It is, for the most part, a content Spirit. rolling around in the greenery and nosing rain-glossed leaves aside to see what might be growing beneath. Wherever it goes, there is rain, for it is rain: an ongoing pouring from the heavens, sometimes light and sometimes heavy, but never stopping. During its stay, the ground grows muddy, plants explode into verdancy, and many Dahan among those-who-stay spend a great deal of time in a common-lodge, cooking and crafting and telling stories while watching the downpour through the lodge’s open sides. If those-who-travel are caught out near Downpour Drenches the World, they sigh and make the best of a wet situation - its rains may cause inconvenience and discomfort to travelers, or force them to take different paths, but usually don't make journeying outright impossible.

Sometimes, the rains grow torrential for days at a time rather than minutes. Riverbeds flood, cleared ground erodes, and the ground turns to vast reaches of impassable mud. A Dahan proverb cautions against sleeping on one’s back in such weather, lest one drown. Spirit-speakers have learned that the rains seem to match the mood of Downpour Drenches the World - when it’s agitated, winds will gust and blow every which way; when it’s angry the rains will wear away at soil more rapidly - but do not yet understand its mood during these times of heaviest rain. Those who have braved the deluge to seek it out at such times have found it standing high with both heads pointed the same direction, relaxed but focusing intently on something distant, or unseen, or all around, heedless of questions shouted up through the rain.

Downpour Drenches the World paid little heed to the Invaders at first, but has been seeing more and more cleared land as it flies on its journeys. It brings rain to the Invaders’ crops just as much as any other plants - that’s in its nature - but finds no joy in rolling around their ranked and serried fields, and its contented nature is slowly giving way to a fierce resentment.

Isolate target land.
Push up to 1

Target Spirit either gains 2 Energy, or may Repeat one Power Card this turn by paying its cost.
Either you or target Spirit may add 1 destroyed

.
If target land is

, you may instead deal 1 Damage to each