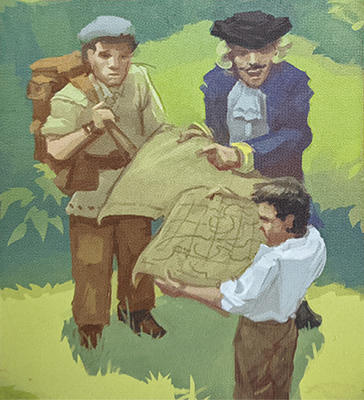 Small groups of Invaders have been searching the island - and a few have found wonders. If they make it home, their people will stop at nothing to seek out more such fantastic treasures. Even those without wonders have tales and trophies that may bolster the Invaders' resolve to stay.

RULE CHANGES
WHAT THIEVES DO

: After Setup, when Invaders successfully Explore into a land numbered 6 or higher, also add 1 Thief there from the pool.

Seek to Escape by Ship: Before the Ravage Step, all Thieves on the island move:

Thieves do not count as Invaders, and do not participate in Invader Actions.

for any other rule or purpose. (Including Fear Cards, Event Cards, etc.) They have 1 Health.

Thieves are face-down by default, but face-up while in lands with 2 or more

. If multiple face-down Thieves are in a single land, mix them up.

Thieves can only be Destroyed/Removed/Replaced in lands with no

. Otherwise, they elude you, and are instead Pushed. You may check this condition either before or after the Action So a Power that Destroys the last

in a land could also Destroy a face-up Thief there).

per Destroyed Thief. Mix Thieves no longer on the island into the supply at end of turn.
SETUP CHANGES
Make a pool of 18 Scenario Markers: 12 blank ones and (1,1,1,2,2,3). They represent small groups of Thieves trying to escape with knowledge or treasure. Mix them to form a face-down supply.