None
Land Rush: On each board with

to a land without 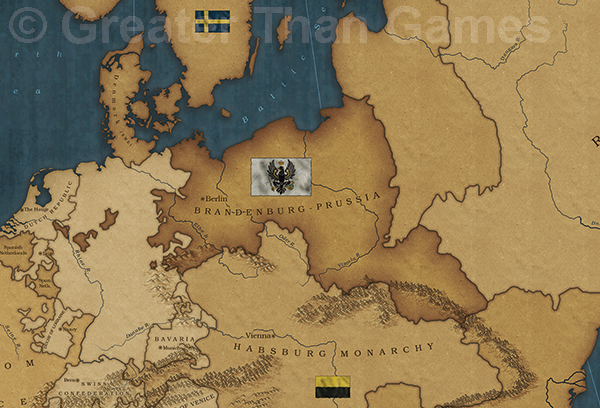 Part of the Base Game.

In the alternate history of Spirit Island, Brandenburg-Prussia became a much more significant power than it was in our own world, maintaining some crucial alliances which greatly increased its size, population, and (significantly) port access.

Fredric William inherited the Duchy of Prussia and Electorate of Brandenburg upon the death of his father George William in December 1640. Eschewing the ineffective and vacillatory foreign policy of his father, Fredrick William abandoned the Polish Vasa dynasty and allied with King Gustavus Adophus of Sweden against Catholic Poland. The triple alliance of Sweden, Russia, and Brandenburg-Prussia resulted in the resounding defeat of the Polish-Lithuanian Commonwealth in 1644, and its subsequent partition more than doubled the size of Prussian lands.

As a result of this victory Fredrick William, the Great Elector of Brandenburg, declared himself Frederick I, King in Prussia, and set about the process of building infrastructure and extending Prussian control throughout his newly acquired territory. Upon his death in 1701, his sun Frederick II inherited a thoroughly Prussian kingdom and one of the premier European armies.

Frederick II sought to further expand Prussian territory without upsetting the continental balance of power between Sweden, Russia, France and the Habsburgs. Building up the Prussian navy, the new king strove to catch up to other European colonial powers and quickly integrate new colonies into the Prussian economy.