A Spread of Rampant Green

on your starting board; 1 in the highest-numbered Wetland, and 1 in the Jungle without any

. (If there is more than 1 such Jungle, you may choose)

Fairly good at dealing with Towns, but terrible at handling Explorers (who are unfazed by prolific foliage). Can get Presence onto the board faster than most other Spirits. Extra Presence is good for targeting and especially for 'Choke the Land with Green", which can be extremely effective at slowing down invaders. Just be careful not to destroy Sacred Sites needed for Power use. 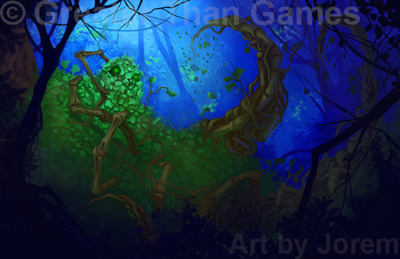 CHOKE THE LAND WITH GREEN:
Whenever Invaders would Ravage or Build in a land with your

you may prevent it by destroying one of your

to the board via Growth, you may optionally use your destroyed

One of the older spirits on the island, though it's even more wild and exuberant these days than when it was young. Contrary to some stories, it does think things through - it's just far more concerned with the process of life than with things like 'consequences".

It's not unfriendly to the Dahan, but its idea of a good time is to smother their buildings in all manner of inconvenient greenery, and its notion of "help" transforms careful cultivated areas into overgrown thickets. Entire villages have been known to move to fresh planting-sites y ears early if a spirit-speaker suspects that Rampant Green is going to stay in the area for too long.

A Spread of Rampant Green is an ancient and enthusiastic spirit of growth and renewal that is extraordinarily difficult to keep down. It can play up to 3 Presence a turn under the right circumstances, and may return its destroyed Presence to play. It assaults the Invaders directly and bodily: clogging water supplies, tearing down buildings with creepers, and overgrowing the land so badly that it brings everything to a standstill: anywhere it has a Sacred Site, it can destroy one of its Presence to flatly prevent a Ravage or Build.

A Spread of Rampant Green is a force of continual renewal and regeneration, a jungle so thick and verdant you can barely see five feet ahead with plants overgrowing your path behind as you walk. Wherever it goes, creepers and greenery twine their way across the land, and the leaves rustle with sounds of laughter; for all that it's ancient and primal, it loves life with the same wholehearted exuberance as a toddler, and shows up at human villages with all the enthusiasm of a kid doing a flying belly-flop atop an unsuspecting parent.

Thankfully, it's powerful enough that its acts of reckless enthusiasm happen at a timescale humans can react to: a village may be overgrown in a night or three, but not in minutes.

.
0
Stem The Flow Of Fresh Water

. If target land is

, instead do 1 Damage to each

OR
If Target land has your

Both Innates require a lot of Plant to activate. Two is available via the Energy Presence track; let's look at the Unique Powers:

Overall A Spread of Rampant Green is - both metaphorically and literally - a grappler that goes to close quarters and pins down the Invaders, holding them in check while the Spirits grow in power. It will need to rely on allies, new Power Cards, and/or the Dahan to help it out with damage and fear, but can also help its allies to develop faster. It has to manage the tradeoff of when to sacrifice Presence to prevent Ravages / Builds, and benefits notably from a bit of foresight, so is a medium-complexity Spirit: fine once you've internalized how the Invaders act, but not good for a first play.

A Spread of Rampant Green/Antistone's Opening[1]

A Spread of Rampant Green/Phantaskippy's Guide[2]